Durbin-Cass connection will not open until winter 2019 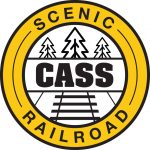 CASS, W.Va. — The Durbin & Greenbrier Valley Railroad (DGVR) will not open its Durbin to Cass connection until after the fall season. DGVR track crews have maintained, and at times, operated ahead of schedule on its track rehabilitation effort, however a small 40-foot bridge is in need of replacement, and that project is being overseen by the West Virginia Department of Transportation.

The state is already moving forward with a design type and construction schedule, but the full construction will not be completed until mid-to-late fall, preventing a late-summer debut and regular excursions in the fall.

“We understand the delay in unveiling this rail line may be disappointing, but we’re grateful for the state’s leadership and their collaboration in providing us with a brand new bridge that will be able to safely serve our customers for many years,” Gunnoe says.

The previous bridge at Trout Run was dislodged during the historic flood of 1985 and while original assessments indicated a new bridge could be built on existing abutments or through a culvert-style design, it was determined in collaboration with the railroad’s engineering partners that the most ideal option is a new bridge.

DGVR, which oversees the Cass Scenic Railroad, had intentionally delayed selling public excursion tickets on this new corridor until a firm opening date was reached internally. The railroad’s Rail Heritage Weekend on Sept. 6-8, 2019 was to serve as the soft opening for the new line and was going to provide photographers the chance to travel between Cass and Durbin by rail for the first time.

With the delayed opening, DGVR will still host the three-day event, but will concentrate operations out of Durbin south and from Cass to the north, meeting at the out-of-service section at Trout Run. The event will trace the entire line segment with the exception of the small area at Trout Run.

DGVR track crews have restored more than 10 miles of the line between Cass and Durbin, installing over 17,000 crossties and installing thousands of tons of rock ballast. Additional tamping and track work will be finalized in the coming weeks in preparation for the September Rail Heritage Weekend.

DGVR encourages those interested in all projects to visit the ‘Legacy’ page online at www.mountainrail.com.