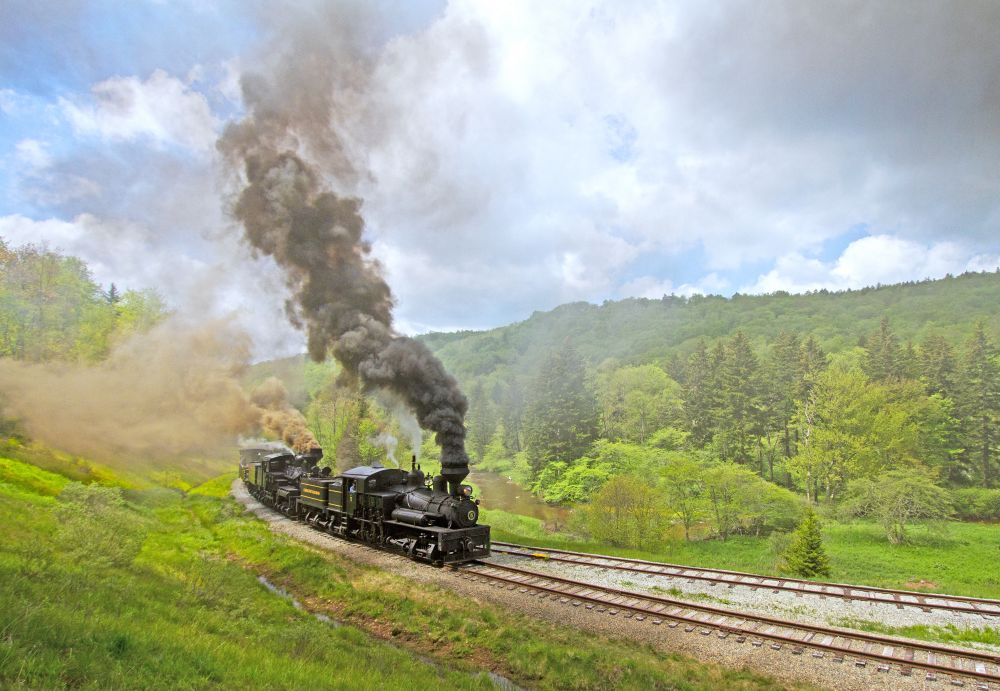 The Cass Scenic Railroad operating season is more than 80 percent complete under its first year of operation by the Durbin & Greenbrier Valley Railroad (DGVR). The operation of Cass has expanded DGVR’s Mountain Rail Adventure portfolio to now include the four tourist train destinations of Elkins, Cheat Bridge, Durbin, and Cass. 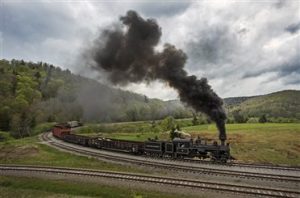 In addition to an expanded operating area, the DGVR is also working on other in-house projects that may interest members of the railfan community. One of the major projects includes the acquisition and restoration of Buffalo Creek & Gauley 2-8-0 No. 4. Another project is a major track rehabilitation initiative underway to connect Cass with Durbin, a length of about 9 miles of former Chesapeake & Ohio railroad. 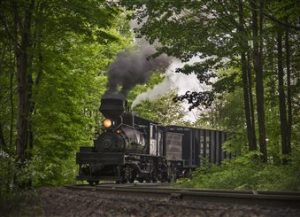 Last month, I sat down with DGVR President John Smith in a Q&A segment that featured questions asked by attendees of the 2015 Cass Railfan Weekend. The following topics discuss operations, preservation, and initiatives going forward aimed at expanding rail tourism and preservation.

Q: The Cass train ride hasn’t changed much over the past fifty years.  Are there changes planned to encourage more repeat business? How do you reinvent the wheel, per say, when you traverse the same rails year-after-year?

A: We are making plans for interactive interpreters, re-enactors really, that will illustrate through realism what it was like to live in and witness the day-to-day history of the various aspects making up the entire Cass experience. We are keenly aware of the competition from the many other types of entertainment venues and are determined to market Cass as much more than a train ride through the mountains. This is a key to survival.

Q: You have plans to restore the tracks between Cass and Durbin, which have had past issues with floodwaters from the Greenbrier River. What, if anything, will you be doing to strengthen the roadbed to try to help prevent future washouts from the inevitable future floods that will pop up?

A: Similar to our efforts on the track that we restored south of Durbin, we adjust the roadbed up and over to the degree possible to allow the river room to roam. A good portion of the washouts occurred as a result of poor drainage between the hillside and the track. We are adding numerous culverts to address this. 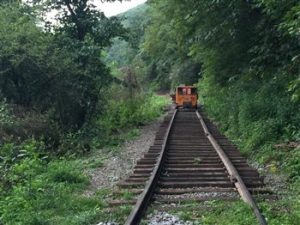 To date, track crews have successfully rebuilt the first 1,600 ft. of roadbed south of Durbin and repaired the first of six major washouts on the 9-mile railroad connecting Durbin with Cass. Excavation has taken place to clear vegetation, repair the roadbed and rebuild segments of the right-of-way that have slipped. Rail crossties are currently being installed south of Durbin and an additional 18,000 new crossties will be purchased to connect the two locations. Simultaneously, crews are working north from Cass, clearing debris and repairing washouts. Crews have rehabilitated approximately 1.5-miles north of Cass and have repaired two 750’ washouts in the process. Crews are now able to operate trains to as north as Milepost 82. The Cass Depot is located at Milepost 80.6.

Q: From an operational and rehabilitation point of view what is the possibility of getting some of the more historical pieces at Cass operational in the next five years? This would include the logging cars and the log loader?

A: The possibilities are very good! With the combined equipment roster of DGVR and CSRR, there are over 40 vintage freight cars available for use over the entire system. We are currently preparing to request FRA to grant a waiver for many of the cars that are in the best condition, about 25 to start. In 2017, our operations will be connected to form one continuous 120 miles of operational railroad. We plan to create a 1950s-styled way freight traveling from town to town, stopping to switch cars and locomotives at various places.

Q: You currently manage the combined assets of Cass and the DGVRR which affords you six Shays, one Heisler, two Climax, BC&G 2-8-0, several F units, GP9’s and one BL2.  This unique collection, which includes the last shay ever produced, and eventually two working climax locomotives requires special care and maintenance, which is quickly becoming a lost art.  How do you currently deal with the day-to-day maintenance for such an array of locomotives and what is the plan for dealing with the more extensive maintenance and certification issues as they arise?

A: The shop complex at Cass is the key ingredient to successfully maintain this diverse fleet. Added to the Belington shop, we have much of the specialty machines and expertise needed to perform needed maintenance and complete larger projects. Within our group are a number of aging veterans who possess the knowledge and experience needed to keep the operations running smoothly. By offering Railroad Retirement Board benefits, health insurance, paid vacations, and other employee incentives, we have added many energetic, career-minded employees that range in age from 18 to 35. They now comprise over 50 percent of our workforce. Along with AREMA-sanctioned welding certifications, DGVR is a member of the ASLRRA and routinely sends its employees to training seminars and qualification classes for various programs.

Q: What are some of the challenges faced by operating rail lines through some of the most remote and rugged locations in the in the North Eastern US using steam and first generation locomotives?

A: Along with communication issues owing to the mountainous, remote nature of our lines, we also have the federally mandated Radio Dead Zone surrounding the NRAO. This compounds our efforts to closely monitor each train. As a counter measure, DGVR has set up a number of wifi hot spots that our crews access as they arrive at remote locations and report their status.

Another topic of significant interest is the opportunities for collaboration between DGVR and the Mountain State Railroad & Logging Historical Association (MSR&LHA). The 501-C3 non-profit organization has supported preservation projects at the Cass Scenic Railroad State Park for many years through its annual Cass Railfan Weekend fundraiser. The DGVR’s operation of Cass in 2015 allowed the two groups to partner for a rare mileage steam excursion originating in Cheat Bridge. This event sold more than 250 tickets and brought photographers to West Virginia from as far away as Japan.

In July, the association began preliminary planning for its 2016 Railfan Weekend, but internal resignations within the board’s administrative positions left the volunteer-driven association looking for engagement from its 600+ members. Three total resignations between July and late August prompted the association to publish a Running Extranewsletter  as a call-to-action that encouraged members to engage in West Virginia’s logging and railroad history. 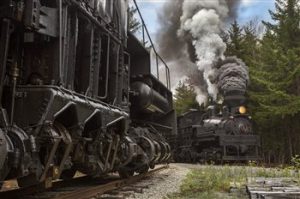 “The Association is at a fork in the road and its future direction depends on its members. Will we continue to be the organization that produces a top quality journal and actively supports the preservation of history in Cass? Or will we revert to simply publishing the Log Train with little active involvement at Cass? Or we will quietly fold our tent and fade into history? The Association’s future direction depends on you, its members,” an excerpt from the Running Extra stated.

The association also elaborated on the progress of its Climax restoration in its most recent newsletter. The locomotive’s boiler has been temporarily mounted on the frame and volunteers are working to contract out remaining tasks. The association elected to ship the locomotive’s crankshaft and associated components to the Strasburg Railroad for additional work. The project has been adequately funded through an Aug. 1 decision to allocate an additional $25,000 from the general operating fund to the Climax account. The project balance is at $57,000 as of Aug. 1. Once all components are back on-site, Cass personnel will compete the pressure-related work on the locomotive. 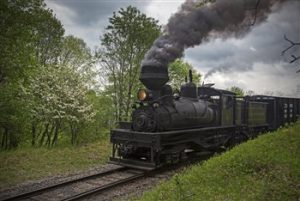 Following the resignation of Railfan Weekend planning committee members, the board elected to cancel planning for its 2016 Railfan Weekend, attributing the decision not only to inadequate volunteers, but low attendance in previous years. This is the first year the association has not sponsored a Railfan Weekend in more than three decades. This decision has left many asking what role will Cass’s non-profit support group, the Mountain State Railroad & Logging Historical Association, play in the future of the Cass Scenic Railroad and DGVR?

“DGVR will work in concert with them to develop the railroad logging history to the extent they wish to be involved,” John Smith said. “It is unclear at this time as to the total impact that MSRLHA will have on the future operations.”

The association will be seeking input at its next board meeting on Sep. 19 on ways to engage with its members. A list of potential projects at the Cass Scenic Railroad State Park are being assembled for review by directors of the association and those interested in accepting roles as project leaders are encouraged to contact the website.

For more information on the Durbin & Greenbrier Valley Railroad, visit www.mountainrail.com and to learn more about the Mountain State Railroad & Logging Historical Association or to get involved, visit their website at www.msrlha.org